THE ECONOMY IS NOT WHAT YOU THINK

I am just the dust of the earth and no one is beneath me.
The only thing special about me is that I am forgiven.

I remember when I was a teen ager you could walk into any store or any bank and plop down a dollar bill and they would give you something of value, (a huge chunck of precious metal for your dollar bill), a brand new shinny silver dollar.

Have you ever held a real silver dollar? It has a lot of weight to it, it feels like you have something substiantial in your hands in place of your dollar bill and you do.

In 1964 they took silver out of our coins that started a chain of events that lead us to where we are today.

August 15, 1971, President Nixon announced that the United States would no longer convert dollars to gold at a fixed value, thus completely abandoning the gold standard.

After that America has been in an economic downward spiral ever since.

Now the (National Debt) is over $22 Trillion Dollars this figure DOES NOT include State, County, Municipal debt or (Unfunded Liabilities (Medicare, Medicaid, Social Security, Obama Care etc. this is about 94 Trillion Dollars alone.)

Also now that we are considered “Investors” in our banks and (NOT depositors) we now (BY LAW) assume the banks Derivatives liabilities. The total exposure to Derivatives by just the top 5 banks in America is about $290 Trillion Dollars.

(BUT if these derivatives are valued properly the true value of the U.S. bank exposure is closer to $500 Trillion Dollars.)

It will NOT matter if your bank holds derivatives or not, they (BY LAW YOU) will still be liable for that bill when it comes due, DID YOU KNOW THAT? Your congress that YOU voted into office to represent YOU voted in 2014 to change your status in your bank from being a depositor to being an ‘investor’ so when your bank goes belly up (amd it will) your bank can legally seize ALL your funds on deposit to cover THEIR gambling expensis. Because that is what a derivative is is a gamble and YOU LOSE. Have you ever heard of a (Bank Bail-In?) You will…

So the GRAND TOTAL exposure to just America’s total debt alone is a WHOPPING $340 TRILLION DOLLARS to $550 TRILLION DOLLARS, plus or minus a few dollars.
BUT WHO'S COUNTING & WHO CARES, RIGHT?

Deutsche Bank in Germany is the largest bank in Germany and is on the verge of collapse. Deutsche Bank holds about 70 Trillion Dollars in derivatives and when that bank goes down, all the banks of Europe will collapse. Then banks all over the world will collapse. The modern banking system is a monster with many tentacles and these tentacles are called Credit Default Swaps and Derivatives as most banks hold other banks obligations. Making all banks vulnerable to one banks collapse.

The total exposure by world banks for the derivatives they hold on their books is estimated to be $1.5 Quadrillion Dollars. If you took every ones money, if you took everything it would not equal that. And that is exactly what the bankers want, EVERYTHING.

Can you see Venezuela in the rear view mirror approaching fast? They already are eating cats, dogs, rats everything they can find to eat. They have armed guards on the food delivery truck’s as it will be here one day soon.

This is how you turn America into a third world country over night. Our Currency says in “God we Trust”. But just how many are really Trusting in God? We have Government Leaders, Heads of Business, Major Banks all pushing for an economic collapse and they will get their wish one day SOON.

What do you think the Bilderburg’s are doing when they meet?

And what are the Bohemia Grove people discussing when they assemble?

You can bet it’s NOT for our good, but how to implement ONE LEADER, ONE WORLD GOVERNMENT, ONE CURRENCY AND ONE RELIGION. God will allow it because he has removed his hand of protection from America.

These people know you can’t just ask American’s to give up their freedoms and rights. So they are going to crash the economy, starve the people, cut off their power and make them suffer. Make the people DEMAND, SOMETHING be done, anything and the “so called leaders” will have the answer. That is when we lose all our rights and freedoms and the people will run toward it begging for it just to fill their bellies.

BUT where will that leave us? IN a lot of hot water unless we deny Jesus and join the One World Religion and serve the Antichrist.
I don’t want to be here for that, DO YOU?
I have seen the future and it is a horrific place.

It’s time to get right with God and get IN HIS WILL. Pray the Rapture comes soon and that you will be ready and found worthy.

It’s time to get in your sackcloth and pray like you have never prayed before.

I seek no attention, fame or fortune and believe me I did not want to draw attention to myself but God gave me these dreams and visions to share to let you know the time is OH SO SHORT. What kind of short, minutes, hours, days maybe weeks but precious few weeks if we have that much time. It’s time to talk to your friends, neighbors, family about the grace of God and ask them where they plan on spending eternity.

Watching the news now, IS watching REVELATION unfold before our very eyes, can you deny that???

God wants us to know the season and the season is NOW, the time is HERE and how you spend your last few minutes here before the Rapture is very important. Because I have seen the future and what is coming is simply HELL ON EARTH. And you DO NOT want to be here for the Tribulation as it will be Hell on Earth.

What we say and what we do in these last days is more important than you could ever imagine.

God Bless you and God keep you is my prayer

I have had people ask where they could find my book with the most similarities to the David Wilkerson book (RACING TOWARD JUDGMENT 1976) HERE IT IS. 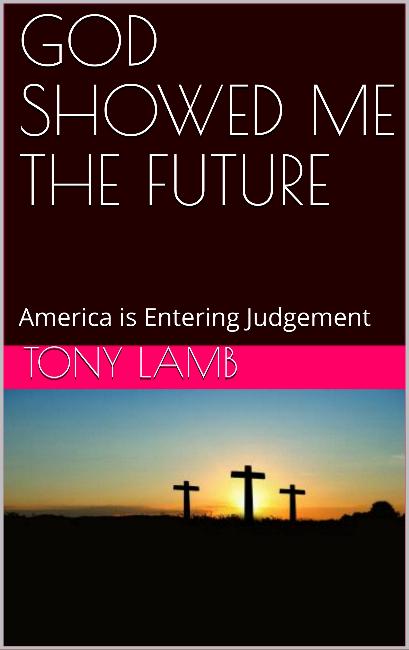 GOD SHOWED ME THE FUTURE
America Is Entering Judgement

All about my dreams, visions and my contact I have had with the Holy Spirit.
One of my dreams: I was sitting in a large theater alone. The lights went dark and a curtain was pulled back slowely reveling a very large screen.
Then the movie started playing and over the next several minutes I saw over a dozen scenarios where America was destroyed. I saw America destroyed by war with nuclear weapons going off in all major cities, I saw tsunamis hit the East Coast and then the West Coast. I saw two large asteroid strikes one was in the Atlantic Ocean and the other was I think in Western Canada. I saw several massive earthquakes strike America, one was in the Cascadia area and then in Southern California and then the New Madrid fault ripped America in half with a huge body of water seperating the two parts from the Great Lakes all the way down to the Gulf of Mexico. I saw several major Volcanoes all going off at the same time and then I saw Yellowstone Volcano erupt in a massive eruption that devistated the land. Yes I saw all this, and much more!

God Didn't Call Me To Be Popular, God Called Me To Be Faithful
I am just a Watchman on the Wall for Jesus Christ with Dreams and Visions - 58 Chapters (over 200 pages in digital format)

(IN DIGITAL FORMAT) Available on Amazon for ONLY $9.99 at: