SHOCK WITH MY DAVID WILKERSON BOOK

I am just the dust of the earth and no one is beneath me.
The only thing special about me is that I am forgiven.

About (June 2019) I got a new book in the mail.
It was by David Wilkerson called ‘Racing Toward Judgment’ written in 1976.

For some strange reason I had never heard of this book called ‘Racing Toward Judgment’. So when I heard about it I immediately went on Ebay and I ordered a copy of it.

When I got it I started reading it from cover to cover. But after about 4 chapters I went and I told Bobbie something is strange here, It’s like I wrote this book. I found key words that he used that I also used in my writings and in my youtube videos.

So I read on and again I went and I told Bobbie again after about two more chapters it was like deja vu reading this David Wilkerson book. Finally at the last chapter I had had enough. I was going to (re-read) this book by David Wilkerson because it was like he was picking stuff out of my brain. I was going to highlight all the key words he used (that I used). But it was much more than that there were 3 or 4 words that were the exact group of words that I used.

There was longer groups of words and short sentences that was almost exactly what I had said with only a minor word changed here and there.

Then there were two, three sentences or whole paragraphs that expressed ‘The exact same idea’ that I was trying to get across but using different words.

I re-read the book and when I finished highlighting all the words and text I went back and I counted how many times this happened.

If this happened just a few times than I guess it would just be coincidence and I would accept that.

BUT WHEN I COUNTED EVERYTHING I HAD HIGHLIGHTED IT CAME TO 57 TIMES.

David Wilkerson also wrote 2 or 3 sentences or entire paragraphs that conveyed the exact same message that I was trying to convey in my writings.

I truly believe that David Wilkerson and I had the same help in writing our books and that helper was the Holy Spirit.

It’s kind of like if you were marooned alone on a deserted island in the middle of the Pacific Ocean for 5 years. And you finally get rescued and you come home only to find a movie staring Tom hanks called ‘Cast Away’. You go see the movie and you are shocked that it is almost the exact same story that you just lived, BUT then you find the movie was made 3 years before you ever became marooned. NOW it would not be exactly the same in every thing but it would be the same in 57 different situations. I could see several maybe even a dozen, maybe even 14 or 15 BUT ( 57 )???

And you could see your life being portrayed out on the big screen only it would be Tom Hanks as if he were playing YOU.

NOW do you see what I am talking about here, this is JUST TO STRANGE. But God works in mysterious ways. Nothing is strange to God and there are no coincidences when it comes to God.

I will give you a situation that I am talking about: page 88 Racing Toward Judgment’ says:
(JUDGMENT IS COMING! ARE YOU PREPARED). A couple years ago the Holy Spirit had me make up a poster sign (and gave me these words to put on the sign) that said: (SUDDEN DESTRUCTION COMES – DO YOU KNOW JESUS). Do you see they use different words BUT they say the exact same thing.

Page 89, Also: ‘The Same God Who Judged The Jews Will Judge Us’.

The introduction: I am not a prophet, and I refuse to allow anyone to put that tag on me. But I Am A Watchman.

Page 84: ‘Wake Up’. I had a dream where someone kept telling me to WAKE UP - AND TELL THE PEOPLE

This is what the Holy Spirit gave me: (Now it’s like watching the clock tick down to an execution) IF it were not for the shed blood of Jesus Christ we ALL would have a date with the executioner.

The very same God who judged Israel, is NOW in the process of judging America and America will fall forever. I HAVE SEEN IT.

My help in all my writing and in all my videos is the Holy Spirit as he gives me so much inspiration. And if someone would think I am a fake or a liar. I have to tell you on my own I am not that smart to come up with all this stuff, the dreams, visions, the contact I have had with the Holy Spirit. I hate to burst your bubble but I am just not that smart.

As for me and my house we will serve the Lord.


I carry my Bible with me where ever I go, out shopping, restaurants, doctors offices everywhere. If you see me out without my Bible it's because I have given my Bible away!

I have had people ask where they could find my book with the most similarities to the David Wilkerson book (RACING TOWARD JUDGMENT 1976) HERE IT IS. 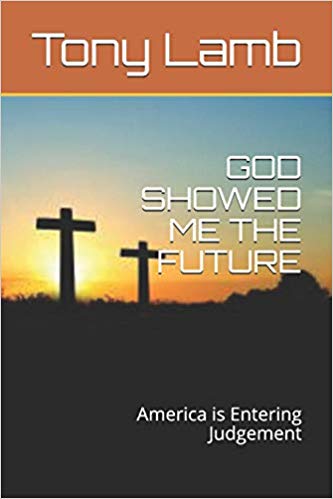 GOD SHOWED ME THE FUTURE
America Is Entering Judgement

I talk about my dreams, visions and what I saw coming upon this earth.
One of my dreams: I was sitting in a large theater alone. The lights went dark and a curtain was pulled back slowely reveling a very large screen.
Then the movie started playing and over the next several minutes I saw over a dozen scenarios where America was destroyed. I saw America destroyed by war with nuclear weapons going off in all major cities, I saw tsunamis hit the East Coast and then the West Coast. I saw two large asteroid strikes one was in the Atlantic Ocean and the other was I think in Western Canada. I saw several massive earthquakes strike America, one was in the Cascadia area and then in Southern California and then the New Madrid fault ripped America in half with a huge body of water seperating the two parts from the Great Lakes all the way down to the Gulf of Mexico. I saw several major Volcanoes all going off at the same time and then I saw Yellowstone Volcano erupt in a massive eruption that devistated the land. Yes I saw all this, and much more!

God Didn't Call Me To Be Popular, God Called Me To Be Faithful
I am just a Watchman on the Wall for Jesus Christ with Dreams and Visions - 58 Chapters (205 pages)