A MONSTER – At The Mouth of 2 Witnesses

I am just the dust of the earth and no one is beneath me.
And the only thing that is special about me is that I am forgiven and,
I am God’s Dirt

How many people missed the signs in the heavens? You know the blood moons, the eclipse, the Revelation 12 sign and even signs in our sun?

How many people are missing the signs in the earth? You know: earthquakes, volcanoes, sink holes, massive cracks in the earth running for many miles.

Acts 2: 19
And I will shew wonders in heaven above, and signs in the earth beneath; blood, and fire and vapor of smoke.

(I give you the Bible as the first witness)

There was a man named Pastor David Wilkerson who founded Teen Challenge and wrote several books, which his most popular book was ‘THE CROSS AND THE SWITCHBLADE’. In 1973 he had a vision of America being destroyed by 3 major earthquakes. These earthquakes started with the Cascadia fault running from Northern Calif. To Vancouver Canada. That earthquake caused the San Andrea's fault to rupture. He did not name the Cascadia fault, as at that time it was unknown.

He called it a ‘major earthquake in an area that was not known to be seismically active’. The Cascadia fault was only discovered about 14 years ago, but before that it was unknown. And the Cascadia fault is a sleeping monster, it has the potential to produce America’s only 9.2 plus earthquake. But there is more, as that fault is a mega thrust fault and it is off shore which will also create a monster Tsunami from 50 to 100 feet high that will hit the West coast.

These earthquakes devastated the entire West Coast in his vision. But his vision didn’t stop there it went on to show him how those earthquakes would cause the New Madrid fault to rupture. And that earthquake would destroy much of the center of America.

Also he saw a major bank in Germany collapse and bring the world including America into a serious depression, unlike anything the world has ever seen. All commerce would stop, money would become worthless paper. No stores would be open and even if they did open they would have nothing to sell. And he saw Americans suffer tremendously unlike ever before.

(I give you the vision of Pastor Wilkerson as the second witness).

I also have had dreams where major earthquakes devastated the West Coast from Canada all the way to San Diego. What I saw was almost every building was destroyed for a hundreds of miles from the earthquake. Also I saw a major Tsunami crash ashore on the West coast and what the earthquake didn’t destroy the Tsunami washed away. Now scientist say everything west of I-5 will be destroyed when this big one hits. I have seen (in a dream) a major earthquake destroy the entire West Coast the bay area all the way down to the greater Los Angeles area along with a Tsunami destroying what was left of the Oregon and Washington Coast.

I have had dreams where an economic collapse destroyed the world’s economy but for some reason it hit America especially hard. I saw people walking down a street and money was blowing down the street and people would not even bend over to pick it up because it was worthless paper. I saw America in the dark without electricity. Then I saw war in America. It seemed that everyone everywhere was fighting.

Are my dreams lining up with David Wilkerson’s visions a coincidence? I don’t think so. (There are no coincidences when it comes to God). David Wilkerson did as God commanded him to do, he wrote books about his vision. He preached and talked about his vision for America, but in 1974 America was doing great and didn’t want to hear about doom and gloom. So many churches banned him from speaking. He paid a price for following what God told him to do. But he was true to God. Pastor Wilkerson passed away in 2011.

(I give you my dreams as the third witness, (but there is more).

Luke 21: 11
And great earthquakes shall be in divers places, and famines, and pestilences, and fearful sights and great signs shall there be from heaven.

Today there are so many earthquakes in Southern California and in the Cascadia rift area scientist say the Big One is primed, loaded, past due and ready any minute to let loose with a monster 9.0 or greater that will destroy the whole West Coast. Remember just a week ago or so Calif. Had a 6.4 followed by a 7.1 earthquake? Scientist say it’s just getting primed for the Big One, which just proves (it is coming and soon). I saw an article recently that stated: ‘Since July 4th Southern California and the Cascadia area have had over 3000 earthquakes’.

Several days ago a federal agency sent a team of scientist to study the Cascadia fault. This team was suppose to be there for about 7 days but after 2 days the team of scientist rushed their research and then requested to be evacuated because they felt their lives were in imminent danger. This is how serious and how close we are to the Cascadia fault rupturing and rupturing in a VERY BIG way.

Also is it just coincidence that Deutsche Bank (the Largest Bank in Germany) just announced the lay off of 18,000 employees and the closing of many overseas operations. Deutsche Bank has been in serious trouble many years but now insiders say it’s only a matter of time before the bank closes it’s doors for good.

This information comes directly from news articles: And here is the problem with Deutsche Bank it holds about 49 Trillion dollars in derivatives which will all come due when the bank collapses. These derivatives will then fall back on other banks in Europe, and they will collapse, then they will fall back onto other major banks through the world which holds loans made to Deutsche Bank as well as some of there derivatives and then they will collapse. Central Banks will collapse throughout the entire world as no one can pay the 49 Trillion dollar bill owed by Deutsche bank. Banks everywhere will collapse. All banks will close (for a while until a new currency can be instituted, probably 4 to 6 months). But then people’s confidence in fiat currency will collapse also.

Pestilences, I guess the new flesh eating bacteria that is now running wild on the Gulf Coast could be considered a new Pestilence. This is just unfolding and appears to be a very serious situation. Watch the news for more info on this as it unfolds.

So now I give you the scientist as a fourth witness, do you need more?

Matthew 16: 3
And in the morning , it will be foul weather today: for the sky is red and lowering. O ye hypocrites, ye can discern the face of the sky; but can not discern the signs of the times.

TO WHOM MUCH IS GIVEN MUCH IS EXPECTED.
America has been given a lot and America has sinned so very much.

(There have been people all over the earth who have had dreams and visions of a massive earthquake hitting the West Coast).

Keep watching and stay in prayer for that Blessed Hope, the Great Catching Away will take us home soon.

NOW, (RIGHT NOW) WHAT YOU SAY AND WHAT YOU DO, IS MORE IMPORTANT THAN YOU COULD EVER IMAGINE.
Because we are going home soon.

So Please carry your Bible everywhere you go and Please say the Blessing over every meal you eat. It is very important to do so in these last days and more important than you could ever imagine.

Now is the time to humble yourself before Almighty God and repent of your sins in Jesus Mighty name. As no other name in heaven or on earth can save you, me or anyone from what is SOON to come upon this vile and corrupt earth. It is not my intention to scare anyone, BUT only to inform you, just how late the hour truly is and just how serious all this is..

As a Watchman I am sounding the alarm. God Bless you, I pray for all of you. Amen.


I carry my Bible with me where ever I go, out shopping, restaurants, doctors offices everywhere. If you see me out without my Bible it's because I have given my Bible away! 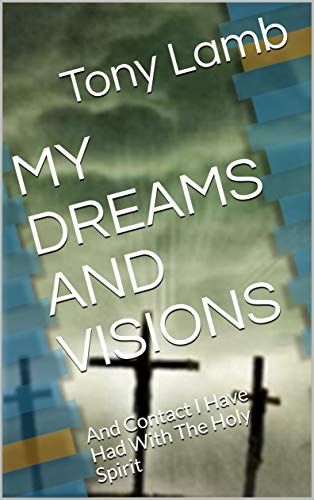 MY DREAMS, VISIONS
AND CONTACT I HAVE HAD WITH THE HOLY SPIRIT

This is a compendium of my dreams, visions and contact I have had with the Holy Spirit.
Starting in 2014 I started receiving a multitude of dreams and visions and the Holy Spirit was waking me up 2 and 3 times a night and sometimes as much as 7 times a night.
I learned to keep a pen and paper on my nightstand, so when the Holy Spirit talked to me I would get out of bed and start writting what the Holy Spirit had just given me. The Holy Spirit knows my memory is short (and not that good). So I would only get one or two sentences and I would write it down and go back to bed. And if the Holy Spirit had more for me I would get up out of bed and start writting again. The Holy Spirit told me to write books and make youtube videos and now I have over 3000 subscribers and over 200,000 views on my videos. My last two websites had over a million viewers. I am only a humble servant, a Watchman with dreams and visions. And, I do not, do this for my glory or fame, but to glorify the one who sent me, Jesus Christ. Yes God gave me dreams and visions of the Time of Sorrows, the Tribulation and I even had a FANTASTIC RAPTURE DREAM. Which I talk about in detail in my book 'IN THE TWINKLING OF AN EYE' listed below.

I am just the Dust of the Earth, the only thing special about me is that I am forgiven.
I am just a Watchman on the Wall for Jesus Christ with Dreams and Visions - 39 Chapters, 155 pages